I had recently heard a Ted talk from Ray Dalio who is an American hedge fund manager and an idea-full person. You can listen to the 15-min video below. It was soo inspiring that it instilled a thought in today evening around how an ideal employee evaluation system should look!

Ray goes on to elaborate his thoughts beyond the dot collector which he used as a primary way to judge the performance of his employees and to inculcate a sense of transparency in his firm. All of his efforts had one agenda, to make sure that no idea goes unheard!

Now before I jump into my analysis of Ray’s dot collector, lets first understand how it looks like! Although Ray’s deployed dot collector had a much complex set of evaluation questions, below is a representation of that which could cover many other work verticals (not just finance): 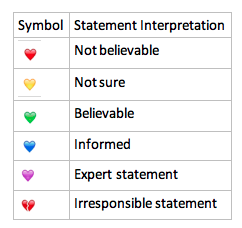 Employees rate each other in ALL meetings and without giving much explanation. It’s expected and acceptable that one person’s assessment can be completely tangential to another person. The dot collector’s data can be used by employees to suggest improvements, decide a project team and even shoot people up/down for promos. Employees can access not only their traits as rated by their peers individually but also other’s traits who rated them. For example, a designer might rate a developer as Believable too whereas a developer can rate the creative person as Not believable assuming his creative knowledge is low. This could prompt the designer to change his language so that developers understand the reasoning behind his decisions.

I was able to see major merits in this system, atleast so much that had I had some authority over testing this out, I would go for it! Let me list down my reasons:

There are some points where I feel more thought is needed:

I feel Dot Collector system needs some modifications and a more comprehensive thought around its implementation. With a limited idea around the tool, a few Pros and Cons will always be missing unless there is a case study published and ratified by many. It looks very thought-provoking and promises to be closer to an ideal employee assessment system by addressing some flaws that exist today.