I have said before that I don’t believe in prophecies, but in my lifetime I think we will have to bear with the India-China power struggle moulding into the Great Asian War. I have heard and read several times that probably the greatest weakness of India, our own Achilles Heel for territorial integrity is the Chicken’s Neck corridor. My blog covers a wild thought to exchange some strategic territories with Bangladesh to ensure that India widens this corridor and boosts her territorial defence capability.

What is the Chicken’s Neck corridor and Why is it important?

The Siliguri Corridor, also known as the Chicken’s Neck, is a narrow stretch of land of about 22 kilometres (14 mi) width, located in the Indian state of West Bengal, that connects India’s “mainland” to northeastern states to the rest of India - 8% of its total land area, with the countries of Nepal and Bangladesh lying on either side of the corridor. The Kingdom of Bhutan and the former kingdom of Sikkim lie on the northern side. Nepal and Bangladesh are also coincidentally our two neighbours with whom our ties get strained now and then.

The corridor is narrow and naturally overburdened with people/goods movement for the whole of NorthEast India. It is critical because of recent calls by separatists such as by Sharjeel Imam to blockade the route. These sparks might have quelled for now, but it’s sure to someday light a massive fire given it’s bordering Bangladesh who does have some (albeit only a few) anti-India elements in its society and the region which also arguably has a high Muslim population sees several separatist protests frequently.

If any foreign power has to set its eyes on India, Chickens neck could be a natural choice of priority for them. It has an eruptive local population, borders foreign countries, has high trade traffic which can be disrupted and the usual methods of policing sadly don’t apply. If one grabs control of this place, they have the whole country down on its knee!

What is my proposal?

My proposal is very simple but yet radical! The region neighbours foreign countries which have at times been super friendly to us - Nepal and Bangladesh. We enjoy a lot of people to people contact and family relations with both. Now is the time to confess to our friends about our greatest weakness and ask their support to fix this. We should separate our strategies into two areas of concern and attack both problems at once:

A longer and stronger approach would be to widen the territory. We could exchange Panchgarh district of Bangladesh with a similar size territory from India’s side such as south Tripura in addition to the compensation for families displaced on both sides. It may look painful and a logistic nightmare to implement but India stands to gain the most if this is implemented. It may open up new avenues for transportation and connectivity with NorthEast India and bring prosperity to the region overall. And of course, the security angle offsets the costs. I propose to exchange the red marked areas which are similar in area, the population as well as natural resources. Panchgarh district is not a super prosperous region of Bangladesh and we might as well agree to exchange areas. On the other hand, the south Tripura region is not only less populated and has more natural resources but also brings two regions north and southwards closer if merged into Bangladesh. 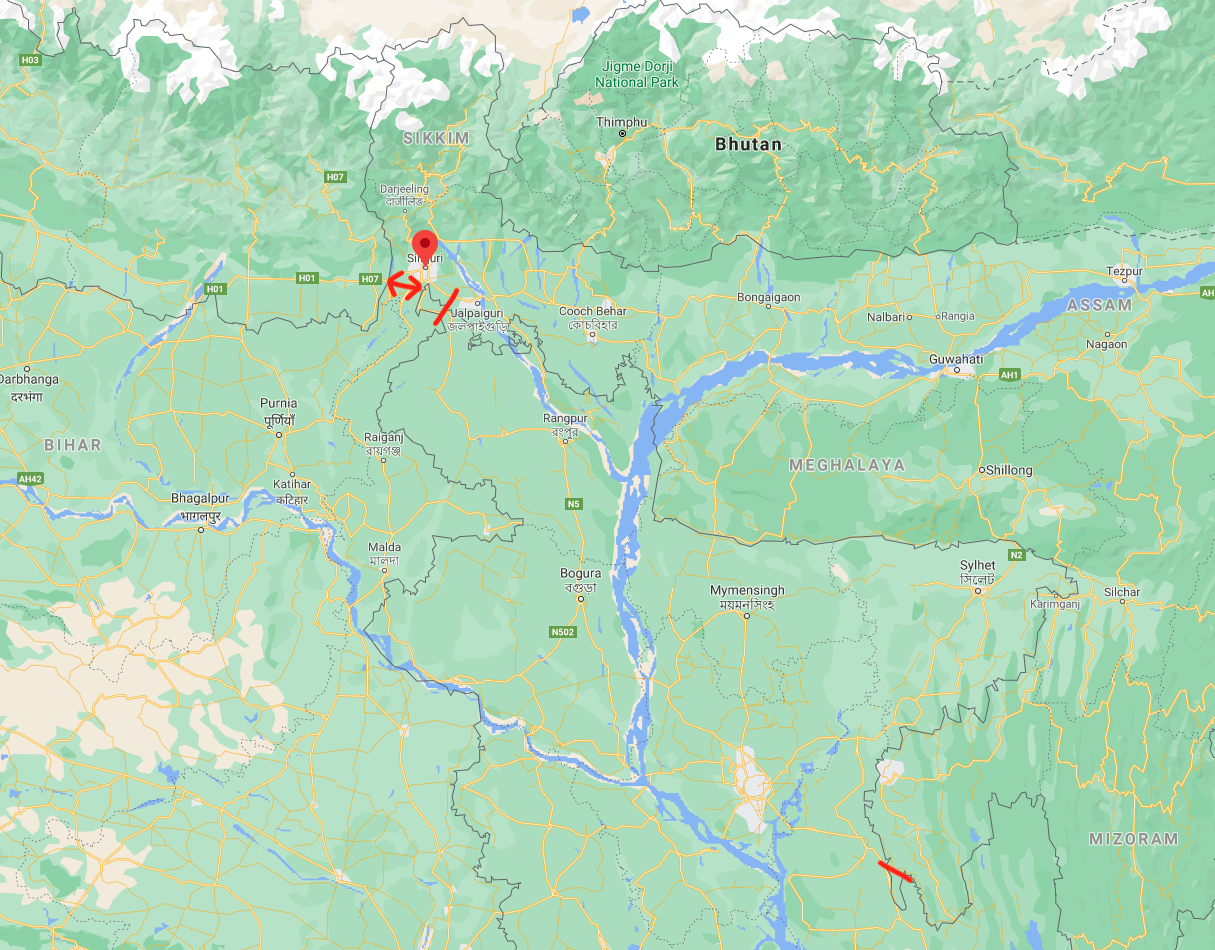 This is not the topic of this blog because it looks like a quick and easy solution to adopt in my naive mind. I am sure it goes a long way to cement longer-term security. No length of territory can safeguard a region if not for people. The threats would also emerge from neighbours and we will have to seek solutions by tying the open ends as soon as possible. If Nepal and Bangladesh National Armies support Chicken Neck’s security and ensure that no malicious planning is done against that sensitive area, then atleast in most cases we gain a reaction-time with misadventures. In institutionalized armies, it is easier to follow the formats of international communication and negotiate mutual support.

There are several pros that I can think of:

There are also some downsides to this:

We already see a greater synergy among India and Bangladesh emerging in the recent past. Initiatives such as the exchange of border enclaves have been peacefully and consensually been implemented. I think now is the time to exchange some giveaways with Teesta-Water-Treaty to Bangladesh to win this agreement. The rise of Asia will be rough and disruptive. We will have to sneak into foreign territories for strategic advantages and our enemies will do the same if not more. They will try to exploit every single chance of weakening India indirectly. As much as non-vegetarianism is prevalent among our neighbouring countries, Chicken’s neck is surely going to be a priority on the menu for their security establishment. A winner-winner chicken dinner is surely not in India’s interest!